HDIM Side event – “Bringing security – on the move”

Across centuries, people have migrated to flee war, hunger, unrelenting poverty, and political oppression, to seek asylum, or seek a better quality of life. Migration is not a new phenomenon. Today, we are witnesses to massive amounts of death and suffering of migrants. The Mediterranean Sea is becoming a huge cemetery; children are separated from their families when crossing the US border, and their parents treated as criminals. The rapidly–changing political climate in many countries with proposals and projects that previously seemed against the law, human rights obligations and international conventions, has a strong impact on political culture on a global scale, promote fear, mistrust, xenophobia, racism, exclusion, deportation and fuels systems of corruption and war.

I feel particularly concerned, coming from a country where people destroyed a wall more than 20 years ago but where the dominating political discourse ridiculizes a ”welcome policy”, where hate speeches have now reached the parliament not just the streets and this happens in all our neighbouring countries. New walls, new deals, new Marshall plans combined with military securitisation in Northern Africa – forgetting about UNSCR1325 and needs of women for a sustainable future and eventually their active role in anti-terror measures.
This phenomenon that we experience needs courageous answers from Civil Society, of political decision makers who have not forgotten their humanity – on a national level but specifically on a transnational level – such as the OSCE. The debate on migration must strengthen a cross-dimensional approach. 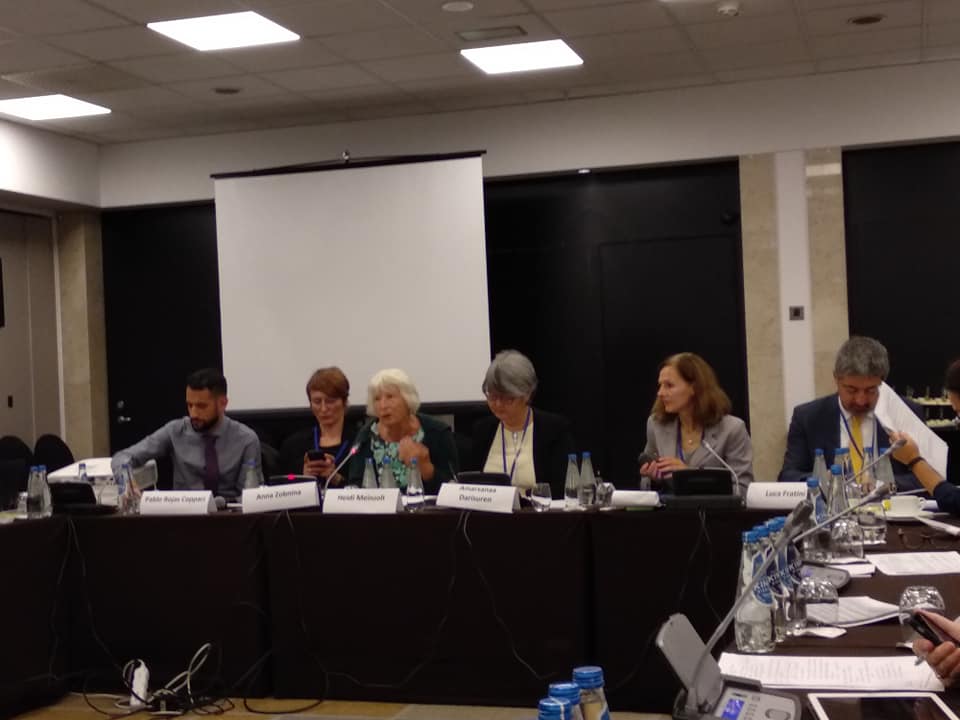 Numerous studies and individual as well as collective well documented experiences confirm that migration affects women in a particular way in the whole cycle. And often the challenges are inter-linked.

If we look at the root causes, we discover:
Feminisation of poverty and increasing inequalities due to multiple crisis (including lack of access to resources, education, independent living, safe sexual and reproductive health services, abortion). We see intersecting vulnerabilities, sexual and economic exploitation, promotion of a dominant and toxic patriarchal lens, discrimination and militarised securitisation. There is a strong tendency of de-gendering political debates with a visible backlash on“traditional values” (a major problem in Central and Eastern Europe) and as consequence re-victimisation of women. While entire communities suffer the impact of armed conflict, women and girls are often the first to lose their rights to education, to political participation and to livelihoods; out of desperation and seeking a better life for their children, are often the first to emigrate – but often reach only neighbouring countries where they remain in difficult situation in big refugee camps with all dangers of being re-traumatised.

On the move, women are exposed to specific threats such as forced marriages, all forms of SGBV, forced prostitution and trafficking, brutalised by armed groups, human traffickers or even border security forces, challenges faced by the service providers in Asylum/Transit/Reception Centres, lack of participation in finding creative solutions, lack of money and exposure to corruption. Sometimes they suffer of the separation and losses of family and children.

In the countries of arrival
Again a variety of fate await them: the chain of care, forced prostitution, lack of educational and social assistance –

especially PTSD, lack of access to adequate juridical advice. Lack of family reunification, of separated shelters and protection in case of harassment. Mass-shelters increase the need for specific protection. Equally frightening threats exist in refugee and internally displaced persons (IDP) camps, as explained by a UNHCR report: “In many refugeesituations, particularly those involving the confinement of refugees in closed camps, traditional behavioural norms and restraints break down. At the same time, women are leaders within the movements that defend land and human rights standards for the benefit of whole societies and their coherence. In such circumstances, refugee

women and girls may be raped by other refugees, acting either individually or in gangs, and self-appointed leaders may punish the offenders. In certain camp situations, unaccompanied women and girls entered what are called‘protection marriages’ in order to avoid sexual assault. The frustration of camp life can also lead to violence,including sexual abuse, within the family.”

The current international job market requires more female labour, but there are no regulations, no security guarantees and no medical programs for such women. Women-refugees have no special centres where they can learn language and receive skills. They are isolated and under the influence of their diaspora. It means that children also will grow in such conditions.

These examples are the result of a continuous exchange, cooperation between political decision makers, institutions with civil society/CSO’s and support of their networks:

All recommendations combine always Protection of women with their meaningful Participation!

b)  Recommendations concerning the organisational structure in Asylum/Transit/Reception centres and the provision of social and health services:

RECOMMENDATIONS TO US AS CIVIL SOCIETY